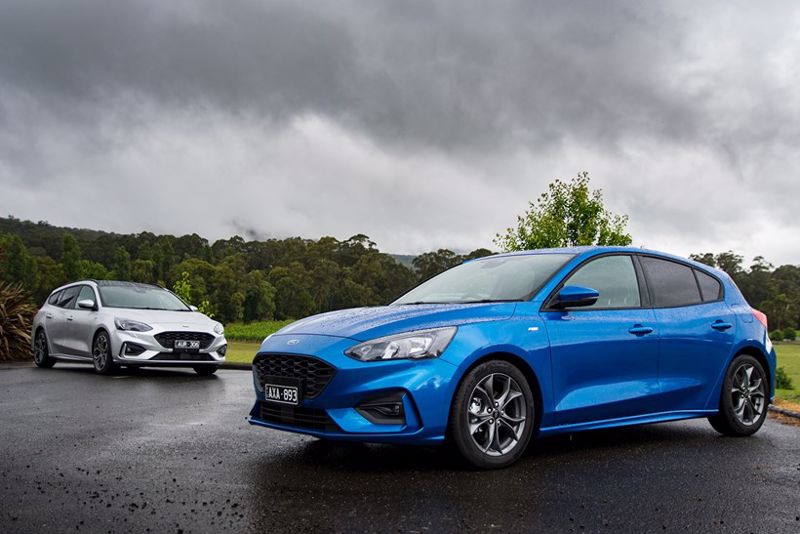 NZ exclusive: our first drive of the all-new Ford Focus in Melbourne

The best time to go out and buy a compact hatchback is arguably right now.

Think about it. It's a segment full of reliable pillars that are hitting their stride. The current Honda Civic and Mazda3 are both as good as they've ever been. The newly launched Toyota Corolla is a welcome return to form. And the Mercedes-Benz A-Class — a vast improvement over its predecessor — just claimed our AA Driven New Zealand Car of the year gong.

Indeed, it's a hotly contested little segment. And in 2019 there are at least two heavy hitters set to take it on; the new Mazda3and Ford Focus. We attended the global reveal of the former at the beginning of the month, and now we've driven the latter in the flesh. 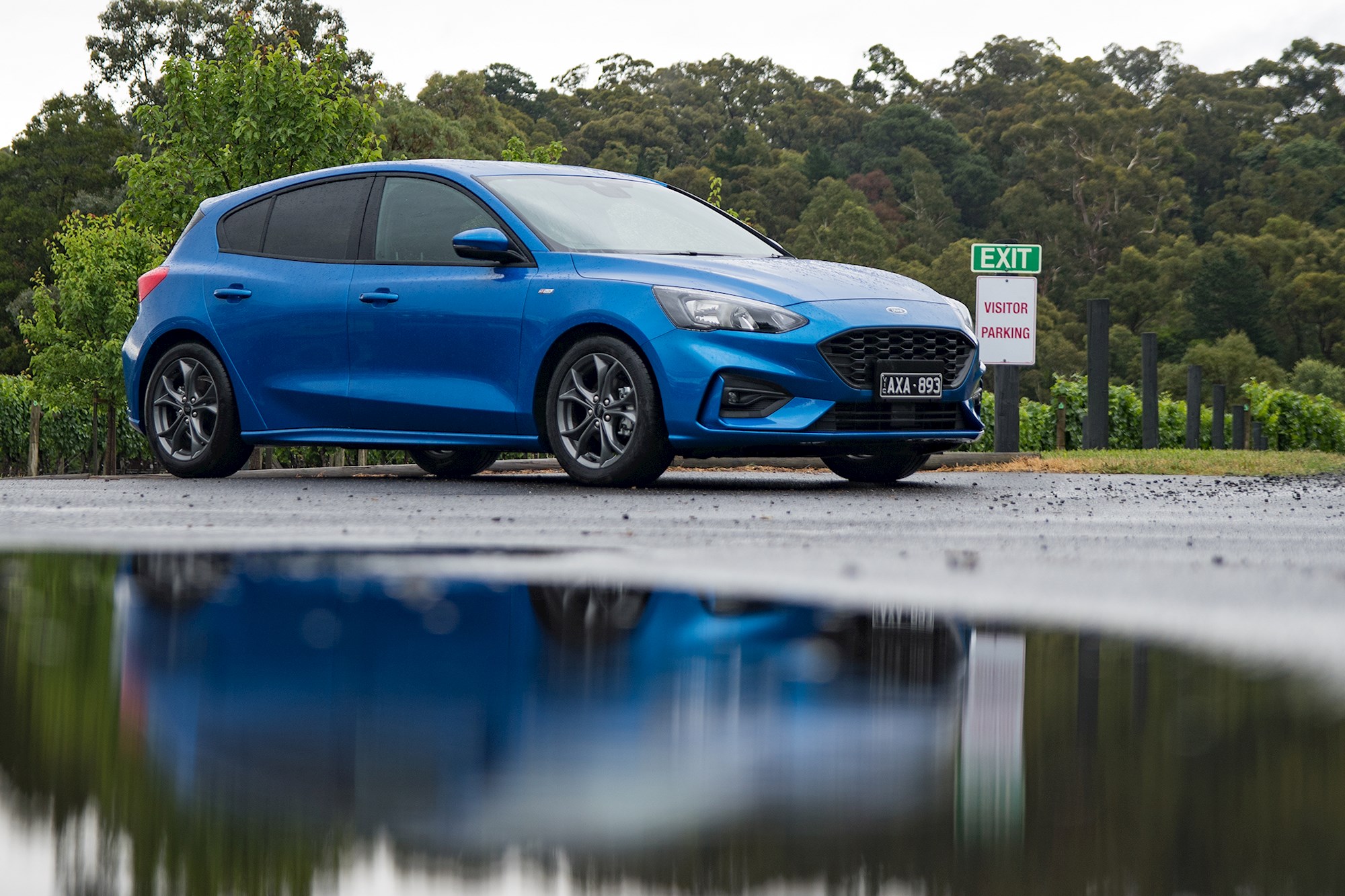 We're currently in Melbourne, having driven the Focus yesterday ahead of our first drive of the new Endura SUV today (our impressions on that will come early next week).

Five models of Focus are currently set to hit New Zealand next year. There are two entry level Trend models — a hatch and a wagon — priced at $31,990 and $37,990 respectively. Then there's the identically priced ST-Line 'warm hatch' and Active crossover trim levels, at $36,990 apiece. And finally there's the range-topping Titanium, at $41,990.

All of them share the same eight-speed automatic gearbox and the same three-cylinder 1.5-litre EcoBoost engine. Apart from the Trend wagon that is, which adopts a 2.0-litre EcoBlue turbo-diesel engine.

Greeted by grim and occasionally sideways rain, we were offered a steer of the ST-Line and Trend hatchbacks at launch, as well as a 'forbidden fruit' ST-Line wagon that's sadly not slated to hit the Kiwi market. The Active and Titanium aren't scheduled to arrive until mid-2019.

From Melbourne airport we drove east through Yarra Glen and Healesville to Marysville. The same Marysville that almost burned to the ground nine years ago in the Black Saturday bushfires. Today, some charred trees still remain, but otherwise the lush greenery is thriving.

The roads connecting all these places were twisting and bumpy — layered with surface changes, undulation, and tight hairpins that would sprout out of nowhere through the day's foggy conditions. In other words, they were the perfect backdrop for testing a range of hatchbacks.

Unfortunately, we were only able to drive the ST-Line hatch. But nonetheless, it's a car that justified much of its hype over the course of the day.

As its name suggests, the ST-Line is a designed to be a more accessible version of the upcoming ST hot hatch. So, it sports a version of the same bodykit, red stitching through the cabin, and more. The best way to tell it apart from its ST counterpart will be to look at the wheels, as the ST-Line sports smaller wheels and much chunkier rubber. 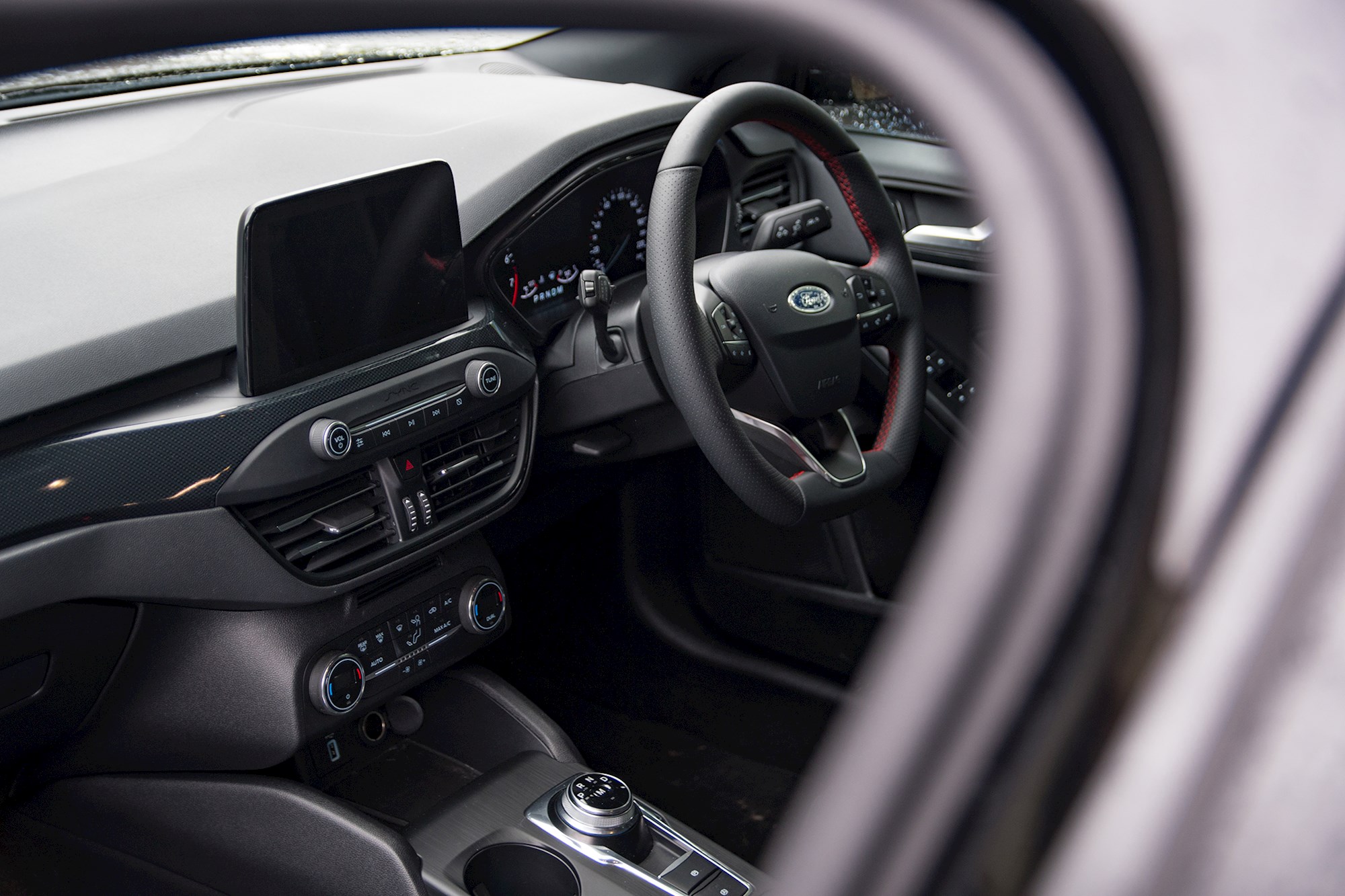 Looks are a subjective thing (we tend to think the ST-Line is the looker of the group), but what's not subjective at the improvements to the cabin.

Gone is the dated mess of buttons that used to plaster the dashboard centre stack. In its place is a much cleaner layout, topped by a standardised 8.0-inch screen. Yes, that screen isn't integrated into the dashboard like it used to be in the Focus. But having it perched on top does place it closer to the driver's eye-line, making it easier to use.

Material quality feels improved throughout. Soft-touch plastics line the dash and door cards. Ford have thankfully been quite reserved in their use of 'Piano Black' surfaces. The ST-Line utilizes textured faux carbon fibre and faux brushed metal surfaces instead to add character. They might be 'fake' materials, but at least they won't attract mountains of dust and fingerprints.

Ergonomically the biggest change inside is the adoption of a Jaguar-style rotary dial gear selector (e-shifter in Ford-speak). It's a touch of knurled metallic class relative to others in the segment, though perhaps more importantly it also reduces the level of clutter in the centre console. In the ST-Line, it's complimented with a wireless phone charging pad.

Safety is possibly the biggest tech talking point of the Focus. It recently got a five-star ANCAP safety rating — helped along no doubt by Ford's revised autonomous emergency braking system that includes pedestrian and cyclist detection as standard. Adaptive cruise control that slows the car to 0km/h and goes automatically when traffic moves is another feature of note. Ditto for the 180-degree split-view rear camera.

Space is vast, especially compared to the new Toyota Corolla that's part of the Driven long-term fleet (more on that next weekend). Rear knee room and head room is commodious, while the boot offers a solid 375 litres of space (1354 litres if you drop the second row of seats).

Part of this comes from the Focus' new underpinnings. It's called the C2 platform, and it will provide the base for numerous new Fords over the coming years. The blue oval have labelled it a game-changer, and in the Focus it certainly makes a bit of an impression. 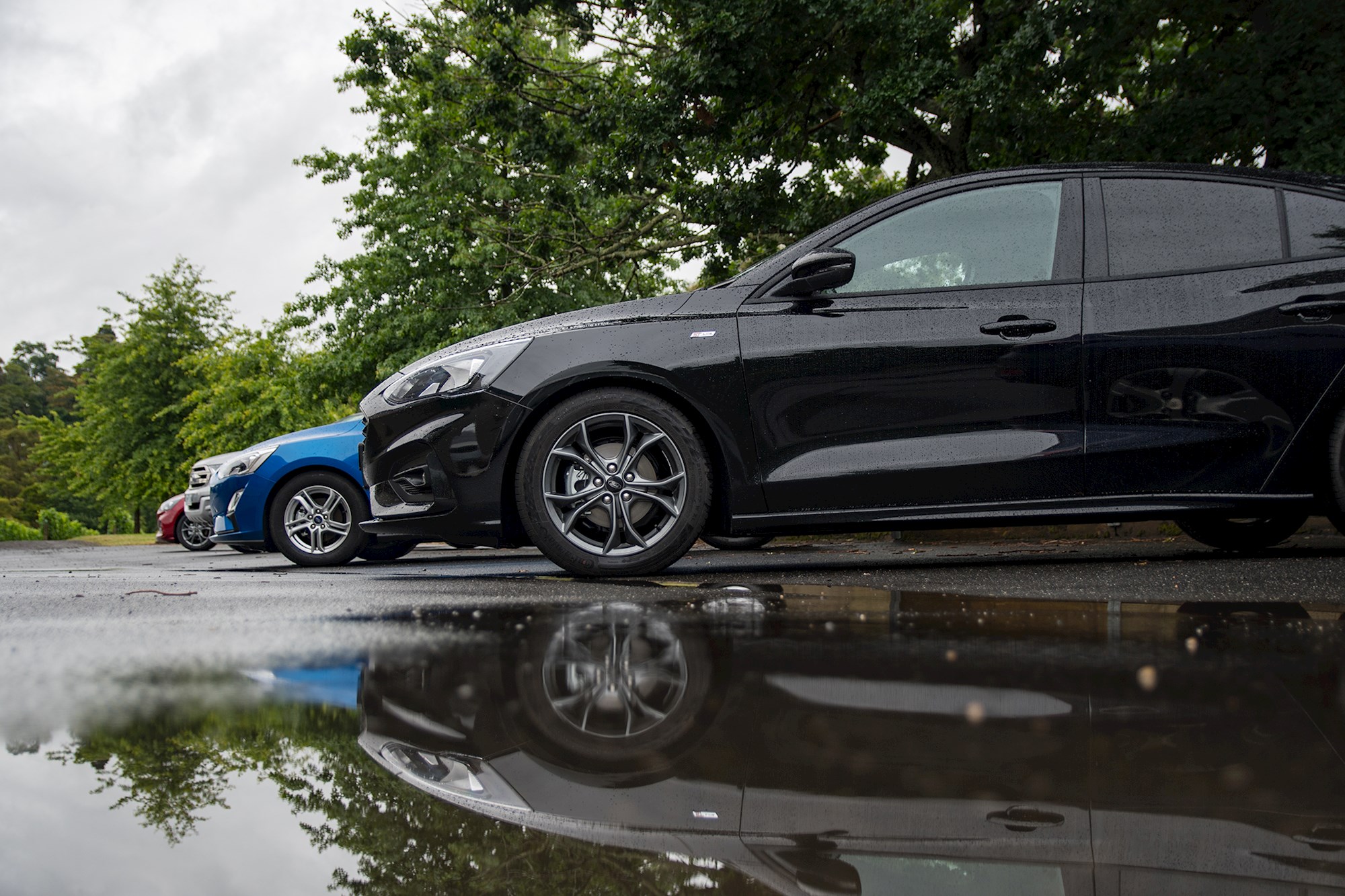 The new platform means a wheelbase that's 53mm longer than the outgoing Focus, which helps create that ample interior space. But the C2 platform's main gains come in the way it handles and its juxtaposition of numbers.

It's 20 per cent more rigid than the previous Focus, while also being 88kg lighter. Dynamics and handling are said to be improved, while simultaneously fuel economy is up by 10 per cent.

Ford have always placed particular emphasis on the way the Focus drives. And although my stint behind the wheel was brief, I walked away thinking that this may well be the new benchmark for handling in its class. 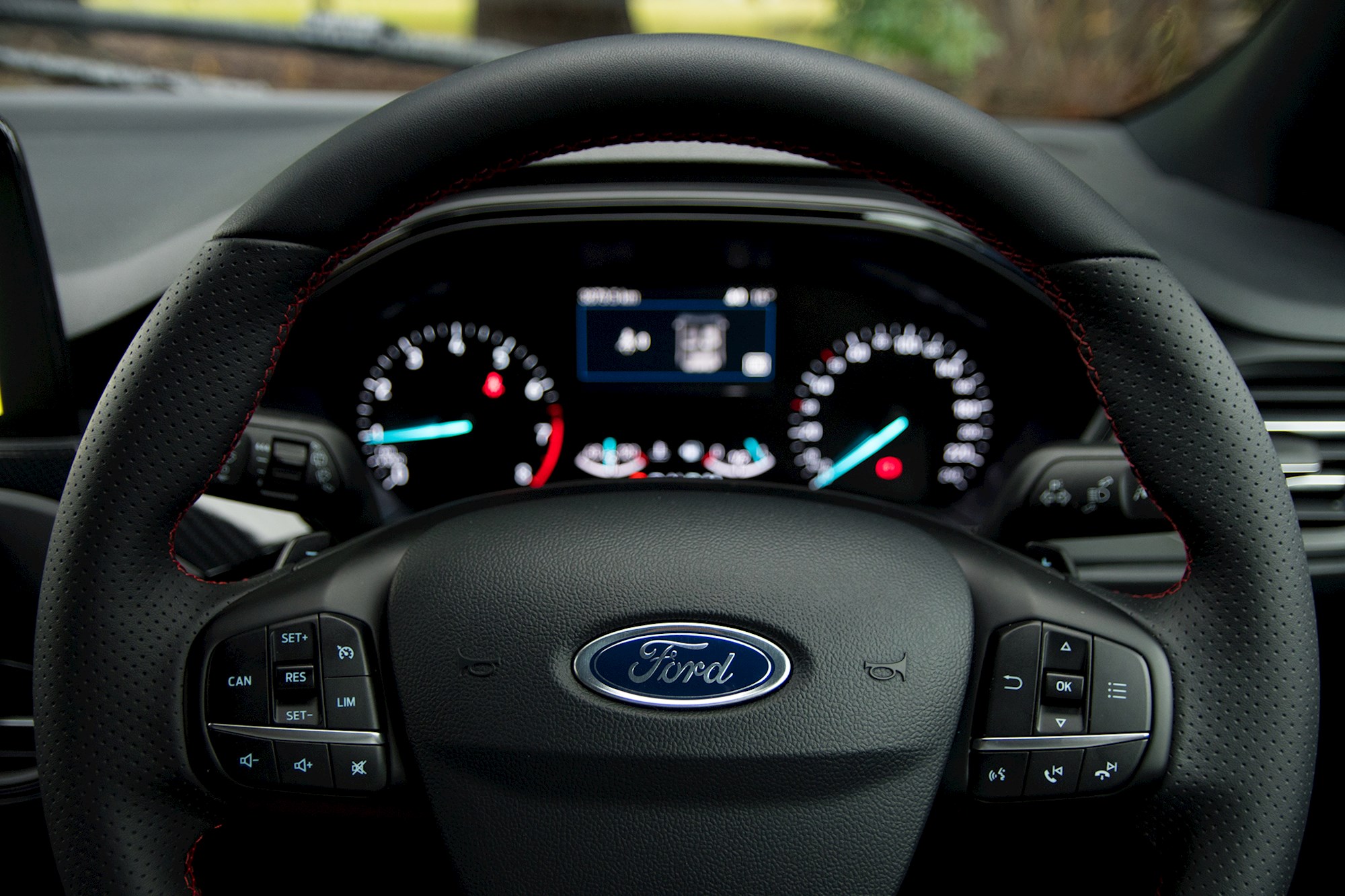 The ST-Line has a few other sly changes up its sleeve, along with the visual stuff mentioned earlier. It's 10mm lower than the standard Focus, and comes with its own unique damper set-up tailored for an engaging drive.

Along with a stiffer and lighter chassis, Ford also worked on making the suspension mounting points 50 per cent stiffer than in the previous model. They accomplished this in part by using the same extruded foam process that's present in this car's big brother — the Focus RS.

The new Focus ST-Line hatch and Trend also make use of the same twist-beam rear suspension and force vectoring springs set-up seen first on the Fiesta ST. The twist beam is a fresh take on a torsion beam set-up, and in theory is inferior to the independent system it replaces (ironically, the ST-Line wagon is the only vehicle in the line-up that gets independent rear suspension). 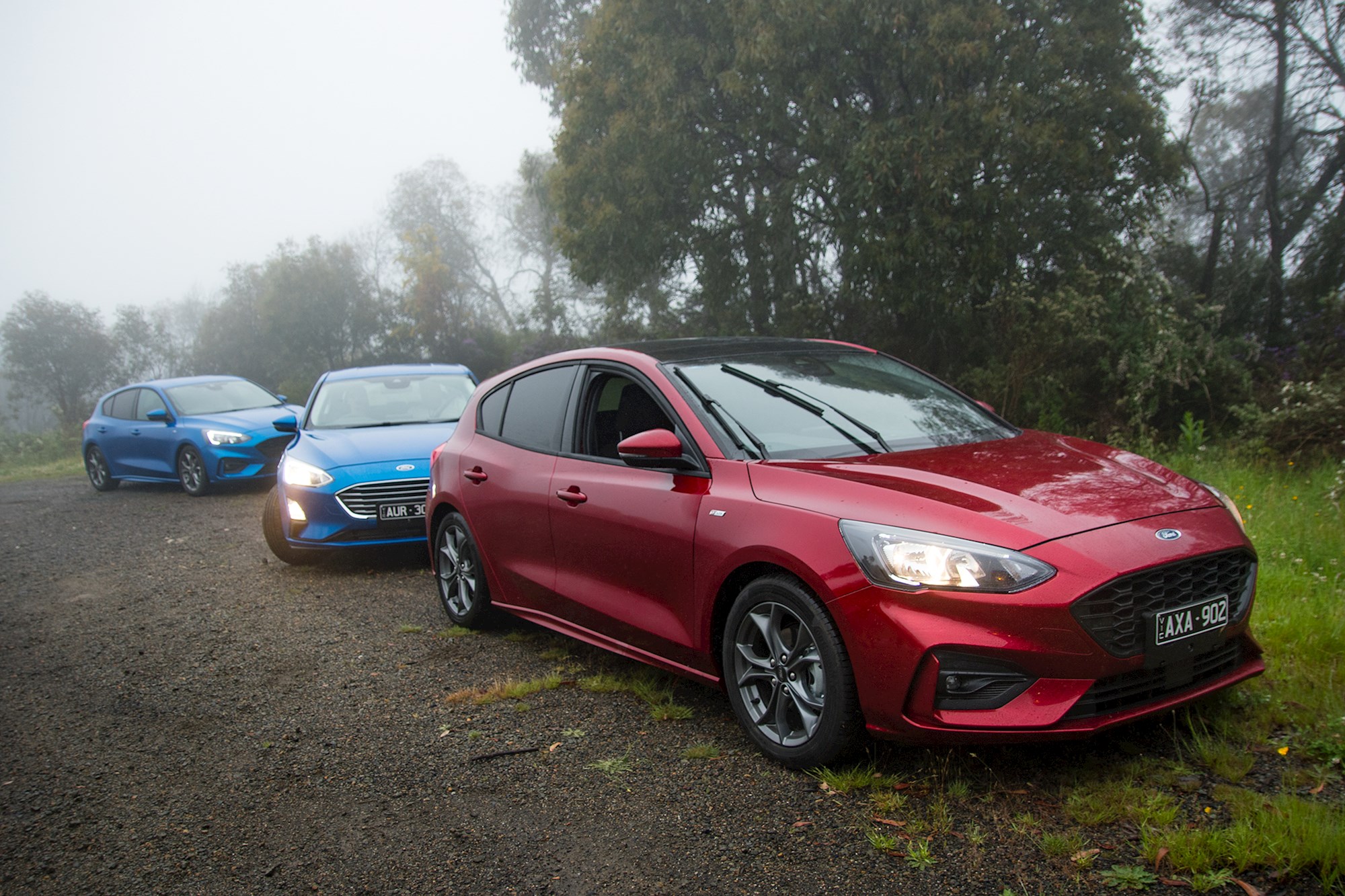 The net result at the end of all that is a little hatch that handles exceptionally well. The amount of balance and poise it displays even on very patchy surfaces is impressive.

Perhaps the most satisfying thing is the steering. It's exceptionally precise and, even with the ST-Line's higher-profile tyre set present, it's happy to respond to additional lock and adjustment mid-corner. It even gives a bit of feedback to the driver — a characteristic that's growing increasingly rare in hatchbacks like these.

Pushed closer to its limits, the ST-Line starts to display traces of understeer and torque steer, but  remember; this is meant to be a simple $36k hatchback, not a hot hatch. And in that vein its cornering capabilities are impressive indeed.

Of course, there's an engine to discuss too. The 1.5-litre three-popper makes 134kW of power and 240Nm of torque. That's more power and torque than the Honda Civic RS and Toyota Corolla ZR, and almost equal with the 138kW/250Nm Mazda3.

It's an engine that has plenty of mechanical similarities to what we're going to see in the upcoming Ford Fiesta ST hot hatch, and it person it's a charming unit to toy with. Around town it's quiet ... spurred on by its cylinder de-activation tech that flicks it onto two cylinders in low-stress situations. But, when prodded with the driver's right foot a familiar three-cylinder thrum sings from the exhaust.

While it lacks a little bit of oomph at higher RPMs, the new engine helps the Focus achieve a 0-100km/h time of 8.5 seconds — not too shabby in this segment. 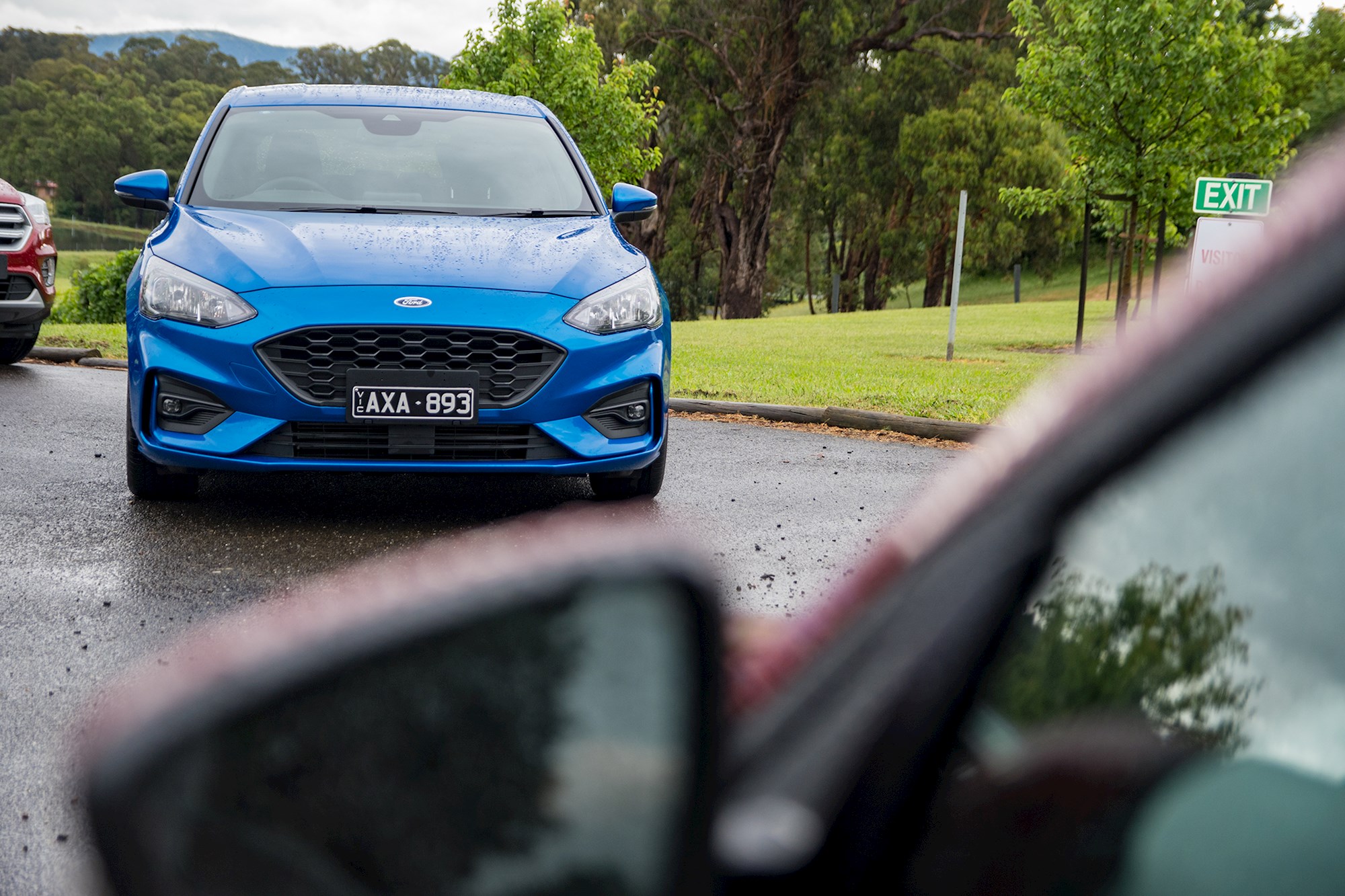 If there's a fly in the ST-Line's ointment, it might be that twist-beam rear suspension set-up. Around town and in general commuting it helps provide a comfortable and compliant ride. But when pushed, it doesn't quite have the chops of the old control blade IRS set-up.

But, that's no deal breaker. The new Focus is a capable, excitable, fun hatchback. And on this first impression, it could easily be the best in the compact hatch bunch.