WHAT’S BETTER THAN A MUSTANG?

To highlight the breadth of the Mustang’s ability, we took the RTR along for a run down the strip at a private event on Meremere drag way. It was our first time on the strip and an enlightening one. A bit like drifting, drag racing is a tad maligned, not quite mainstream, but it’s been around for yonks. And winning on the strip helped sell muscle cars like the Mustang in their heyday. You might think it boring if you’re more into circuit racing and track days but on the contrary, it’s great fun.

On the day there were all sorts in attendance, muscle cars of all eras and origins, Evos, Audis, Teslas, serious competition cars and even the odd English classic. The kids gave me some sage advice at the start, ‘go fast Dad’, as that’s what it’s all about.

"WE TURNED THE TRACTION CONTROL OFF, AS WE DIDN’T WANT IT RUINING THE FUN"

A quick reaction time at the start is key, but it’s harder than it seems. Getting staged early helps, inching up to the christmas tree to illuminate the white lights at the top. That hopefully gives you a moment to get set because as soon as both racers are staged, the starter can set the lights off. And they change pretty rapidly, three ambers flashing in quick succession before the green. And you need to be putting the hammer down at least by the time the third amber is lit or risk being left behind. The first run of the day wasn’t flash with a .303 of a second reaction time or R/T as they call it on the strip. We managed to get better, with a few below .100, one red light, and a best of .002. Let’s call that a fluke. 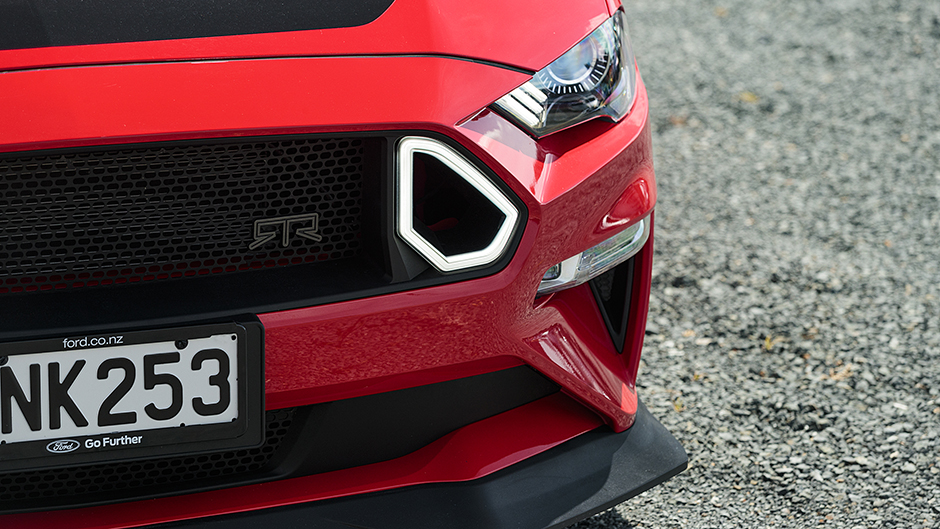 Mustang has a multitude of drive modes now, including a Drag Race setting where the timing isn’t interrupted between shifts, and each cog is swapped hard and fast. For interest’s sake, we did a couple of runs in Sport Plus where the shifts are fast but not so furious, and resulted in times both in the high 12.8sec range. In Drag mode, each change is accompanied by a chirp of the tyres as the torque hits through the driveline, but it helps produce quicker times, our fastest of the day being a 12.714sec. The automatic sure makes life easy; just gun it and hold on. There was only one slight hiccup all day, launching a tad more enthusiastically than usual had the rears scratching harder for traction, the rear end getting a bit of a hop on. It was nothing too major we thought, but it caused a hesitation on the change into second, like it missed a gear, and we found ourselves quickly shunted through to third. Heck, even automatics can miss a gear change under duress. It was time for lunch anyway, so we gave it a rest. After that, it ran again faultlessly a few more times in the afternoon. We turned the traction control off, as we didn’t want it ruining the fun, but left the ESP on as it’s always best to have the safety net in the background should the unthinkable happen.

Of particular note was a match up with a blue 2018 Mustang. Other than the 20-inch wheels it looked fairly standard but it had been enhanced with the big 700hp supercharger.

The owner was wondering what times we’d been getting, thinking we too had the full monte supercharger. They were surprised to find it was running a standard powertrain, but more so to find we were only 0.1sec adrift of their times. But as we have found with the supercharged versions, they struggle to put the power down off the line, and can easily smoke the treads below 100km/h. On the ‘prepped’ staging area, the surface is so tacky your shoes literally stick to it when you walk across it. 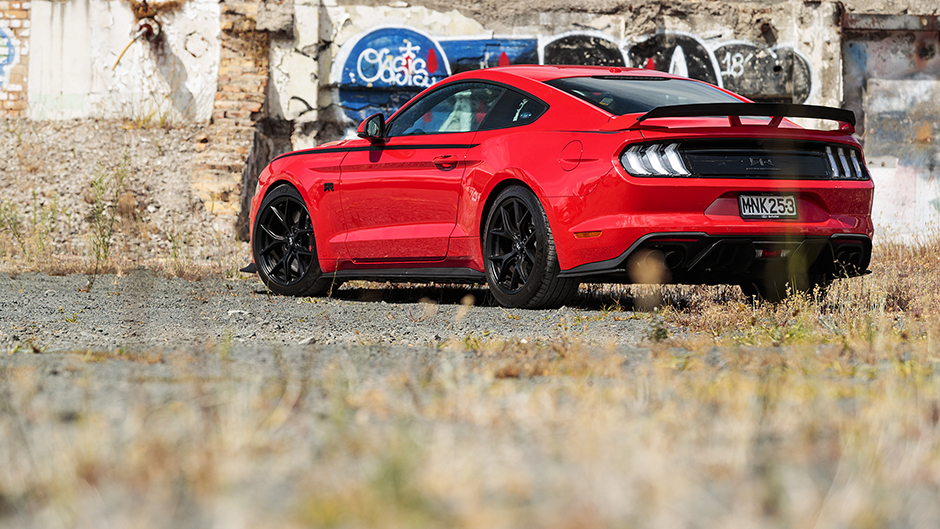 And so we had no real issues launching the standard car. With 2000rpm stalled up on the brake, we could get on the gas pretty quickly at the green, the drive hooking up cleanly and the GT powering on. Not so in the bigger horsepower car, the owner saying he needed to ease it in, and couldn’t go full noise until at least quarter track. And with the start won, it’s hard to make up the difference, even with 700hp. It was pretty close, but our #45 car eked out a slender win on both occasions. We chatted about the various drive modes afterwards, debating the merits of each though the conclusion was simple; the blue meanie required more traction. We suggested a set of drag tyres next time. They clearly work as a couple of 11 second supercharged Commodores and Falcons were certainly helped by running a wider drag radial on the rear. Power is useless without traction.