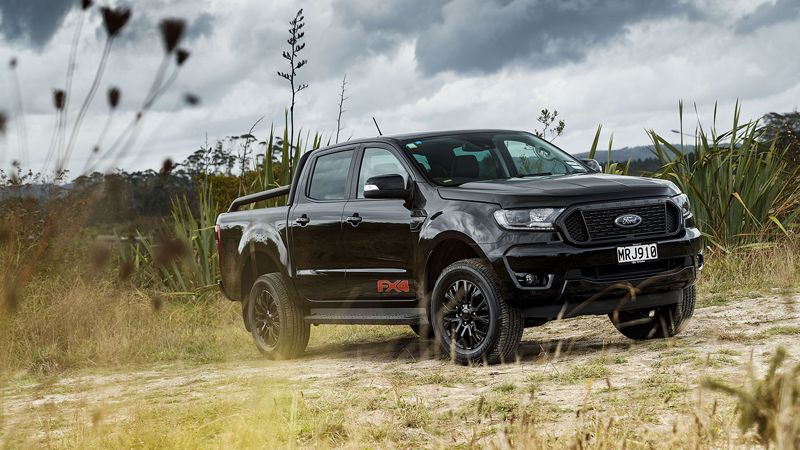 RANGER HAS BEEN THE BEST SELLI

Frequent upgrades to the Ranger have seen Ford assign weird model year designations like 2019.75 and 2020.25 to help differentiate the updates. Part of the revised line-up is a new FX4 variant, taking the number of Ranger choices to 14. It’s one of the few Rangers to get the new 2.0-litre engine, not that Ford references its lowly capacity, preferring to call it the bi-turbo. Having two litres is not ideal but twin turbos gets a double thumbs up.

We like this engine, at least when it comes to tooling around town in ‘lifestyler’ fashion. The bi-turbo delivers strongly, regardless of what the tacho might be reading. That’s if you can find said rev counter, the vestigial dial now buried in the submenus of the configurable instruments. Anyhow, the bi-turbo will haul from its sub-1500rpm zone without coughing, a healthy trait in a Covid-19 alert world. The only time you’ll curse any lag is boosting it from a standstill though this can be alleviated the usual way; just stall it up on the brake before hitting the gap. 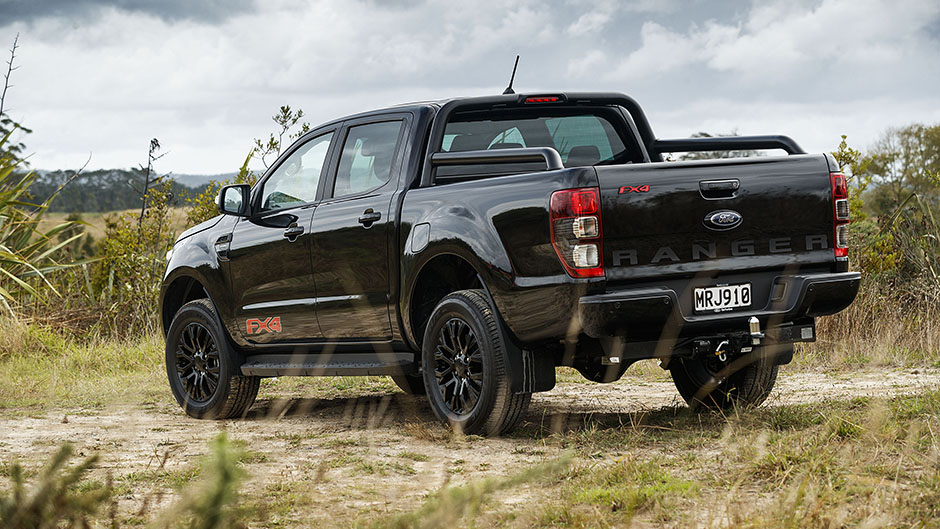 And the 2.0-litre Ranger is one of the quicker one tonners, hitting 100 in nine seconds. It’s not so much to do with the output, though the 157kW and 500Nm help, but rather it’s the ten-speed auto. That’s a lot of ratios to assist with the hauling and it’s a slick operator; the protocols smart, the shifts quick. While there’s a toggle switch on the lever, this isn’t about sport shifting but more a tool for towing. It allows you to lock out gears so it won’t shift beyond your set ratio, stopping it from hunting about. And there’s a dedicated sport mode further down the gate to make sure the kickdown is more immediate, the gear selection keener.

The 2.0-litre spins to four and a bit and is a quicker revver than the big old five-pot. Rangers equipped with the bi-turbo are lighter over the front axle too, making them more dynamic than the 3.2-litre versions. And the Ranger is one of the better handling pick-ups; therefore you are getting the best of the best here. Topping it off, the bi-turbo’s consumption is around the mid-9L/100km mark for town work, whereas the 3.2 can get up into 12L/100km zone for the same sort of thing.

CLICK HERE TO LEARN MORE ABOUT THE RANGER FX4!

The FX4 rides on 18-inch wheels but the progress is pretty swish, unless you’ve experienced the Raptor that is. But the FX4 is an easy drive, the steering light and it’s not too rowdy in the cabin in terms of engine clamour, or road noise.

This fits in the line-up between the XLT and Wildtrak, wearing a black mesh grille, mirrors, handles and bumpers. Inside are leather-accented seats, red stitching and a soft-touch instrument covering, but there’s still lots of hard plastic everywhere else. 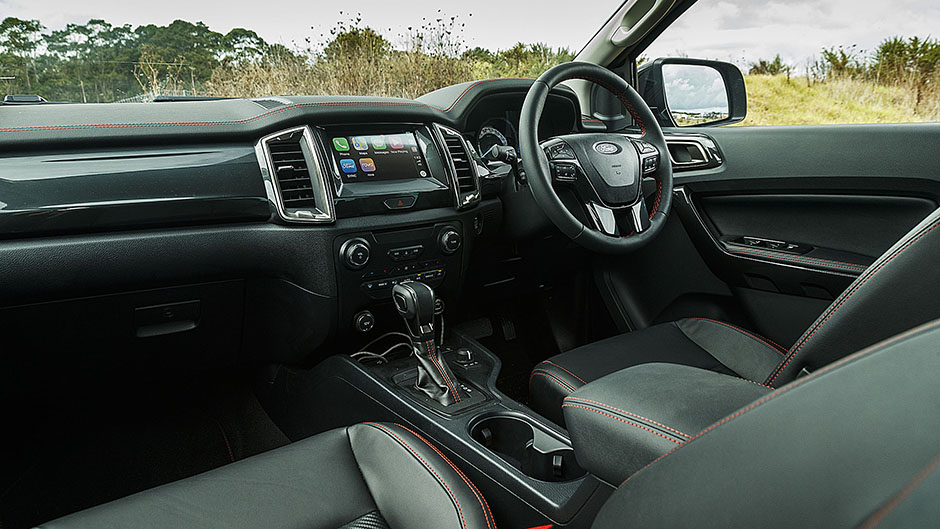 Unlike a Model T, it comes in colours other than black. You should only buy a black ute if you have an apprentice to keep it clean. There’s an FX4-specific sports bar on the back, but the rails extend along the top of the wellside, making it even harder to retrieve things from the side of the tray. The tailgate gets a helper spring easing the strain of closing it, however, so it’s now a genuine featherweight. Like all Rangers, it comes with Ford’s five-year/ 150,000km commercial vehicle warranty programme. 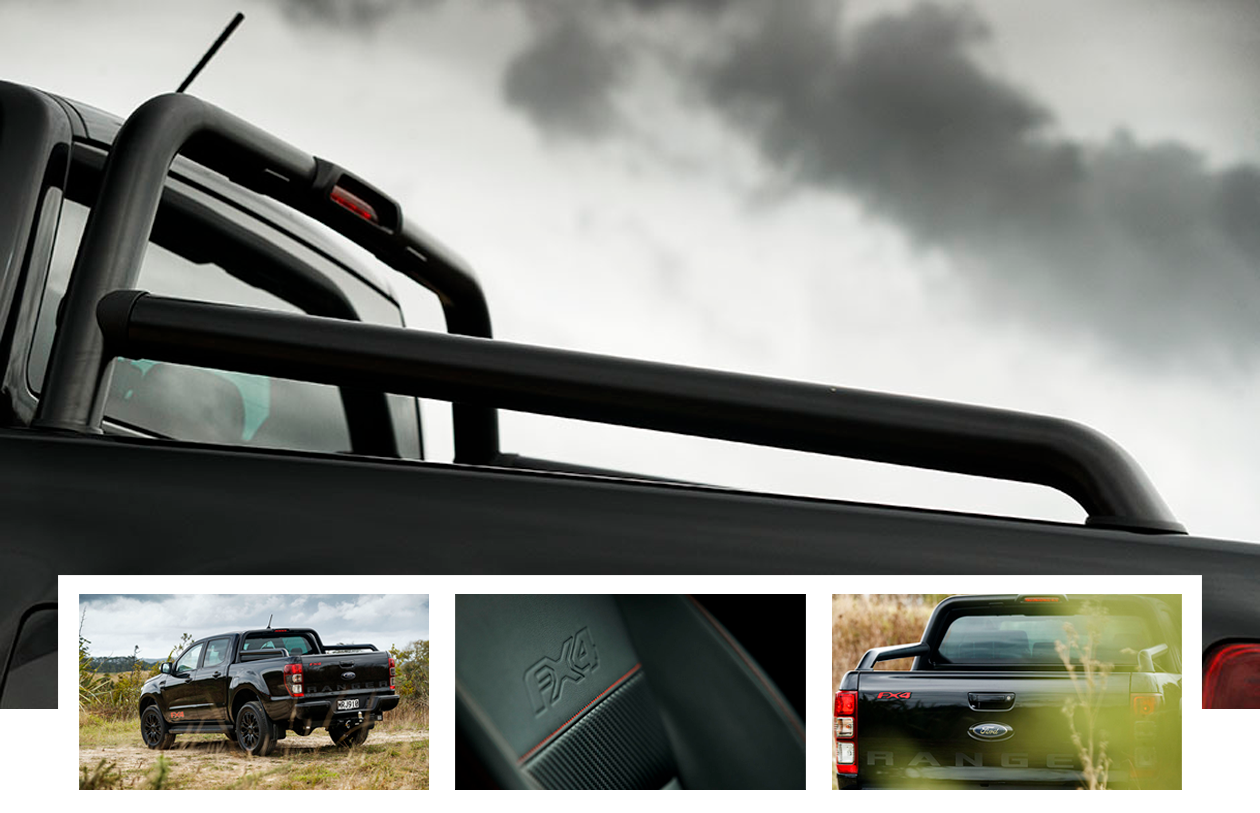 The FX4 lacks the Wildtrak’s fancier active driving aids, but does have AEB, speed sign recognition, and lane departure warning and keeping. It carries a five-star ANCAP rating based on 2015 standards. There’s no blind spot monitoring but the side mirrors afford a good view. It’s not overloaded with convenience specification, but it has Ford’s updated sync infotainment system, and there are rear parking sensors, a reversing camera and a smart key.

These higher end utes are expensive as you are paying for all a pick-up’s versatility; the big tow capacity, the 4x4 hardware and the like. If you’re never going to utilise it all, you’re better off with an SUV. But if you’re into it for the company car tax benefits, save yourself thousands by opting for the 2x4 instead.