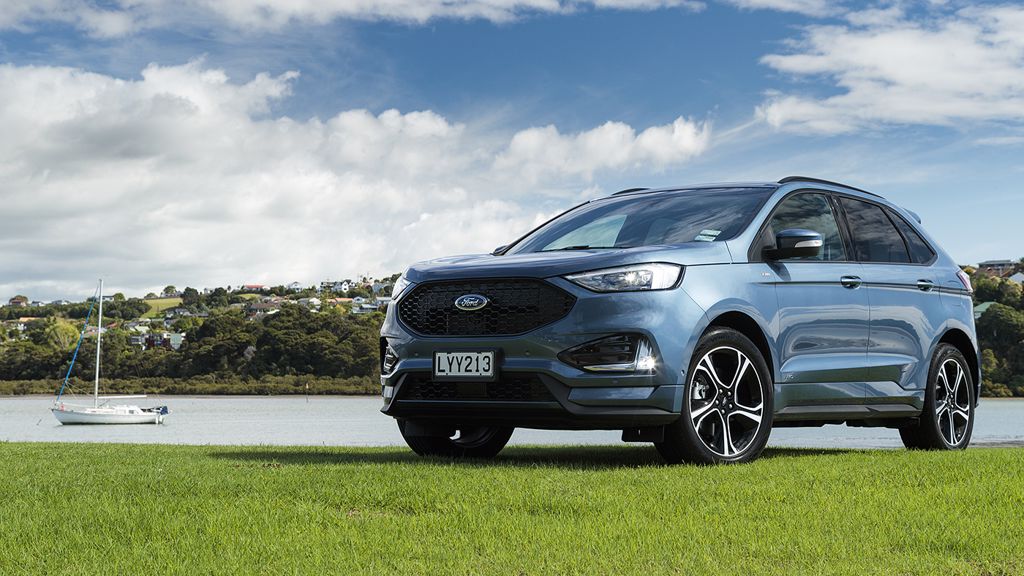 SO THIS IS THE NEW ENDURA...

Nowadays it manages with 140kW and 400Nm but almost no turbo lag. Performance is sufficient, helped by a new eight-speed automatic with paddle shifters, replacing the six-speed twin-clutcher.

"THE NEW MODEL LOOKS BETTER THAN ITS FOREBEAR, NOT THAT THAT WAS EXCITING BUT FORD FANS NOTICED THE DIFFERENCE."

The on-demand AWD is said to work more quickly too. Despite the price drop, it gets better safety specification, all models having adaptive cruise, lane keeping, traffic sign recognition, and the ST gets self-parking.

Other special bits include sports suspension, torque vectoring by brake, 20-inch alloys, a sports body kit, blackened grille and suede-finished seats with heating and cooling. Also standard are LED headlamps, comfort entry, and parking sensors each end. Before it took almost seven seconds, or nearly 200m to complete an overtake.

Now it’s about 0.4sec slower so quick it isn’t. Hitting the S button energises the motor and trans though. Then simply flick back to D so the gearbox heads back to eighth, where it has the engine turning over just 1500rpm when you’re easing along at open road speeds.

We arrived home and I mentioned to the missus that average fuel use was in the sixes, not bad for a diesel pushing a big rig huh? And she said, ‘Diesel?’ So clearly it’s quiet, noise cancellation helping. There’s little in the way of tyre noise too.

We headed to Whakatane in Endura, for the inaugural Sun to Surf half marathon. A tough track, but not as horrid as SH2 on a Saturday morning, crammed with vehicles. Naturally the slow ones seldom move over; Kiwis are such selfish drivers. So we got inventive with sat nav and took a longer quieter route home. A pity you have to pull to a halt to make destination changes.

Given a nudge, there’s a bit much body control and not enough waft. The new model looks better than its forebear, not that that was exciting but Ford fans noticed the difference. We had a few Ranger drivers wander across and give it the once over.

The interior is user friendly, only the buttons for the HVAC are a bit hard to fathom. Its rotary e-shifter is quite nifty in use. This is a roomy five seater, especially in the second row. We got all our bags in the rear seat footwell.

The hold, which is accessed by a powered fifth door, is good for 600L of gear up to the cargo cover and 1688L loaded to the gills. Ford rates braked towing capacity at 2000kg, there’s trailer sway control and a tow bar comes standard.

Endura has a five-star crash rating from ANCAP and is covered by a five-year/unlimited kilometre warranty. We’d rate it as solid and safe but not quite special.