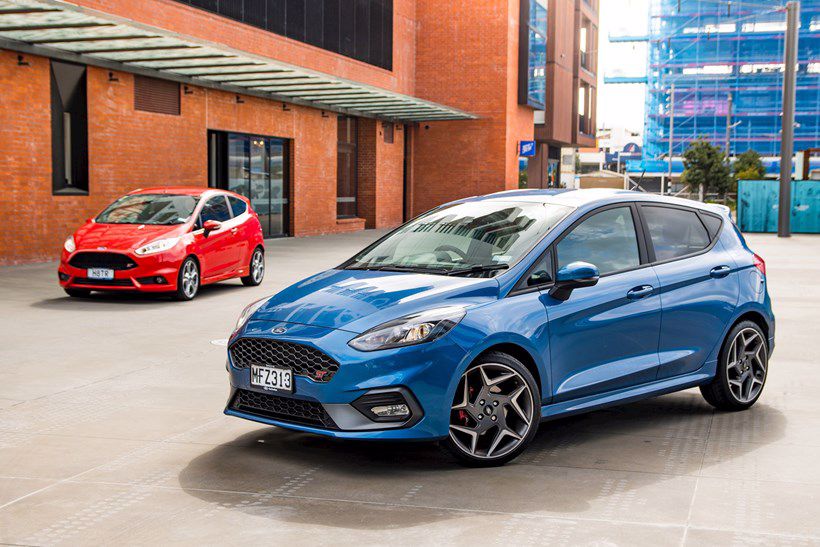 The current boom of motoring world tech is slowly but surely meandering us towards autonomous driving, ride sharing, and electrification. It's wonderful news for a great percentage of people of course, but it has significant drawbacks for those of us that love a weekend fang.

I don't necessarily worry for the supercars of the world; they'll be fine for a while yet. The same goes for the mud loving off-roading set and the colourful motorsport arena. What I do worry about, however, is the entry-level enthusiast — the buyer wanting one car that does it all.

The low cost, high fun four-wheeled chariot has been a concept on the outer for years now. True driver's cars priced under $40,000 are a rarity. But thankfully, there's still a few kicking around if you know where to look. Enter the new Ford Fiesta ST. 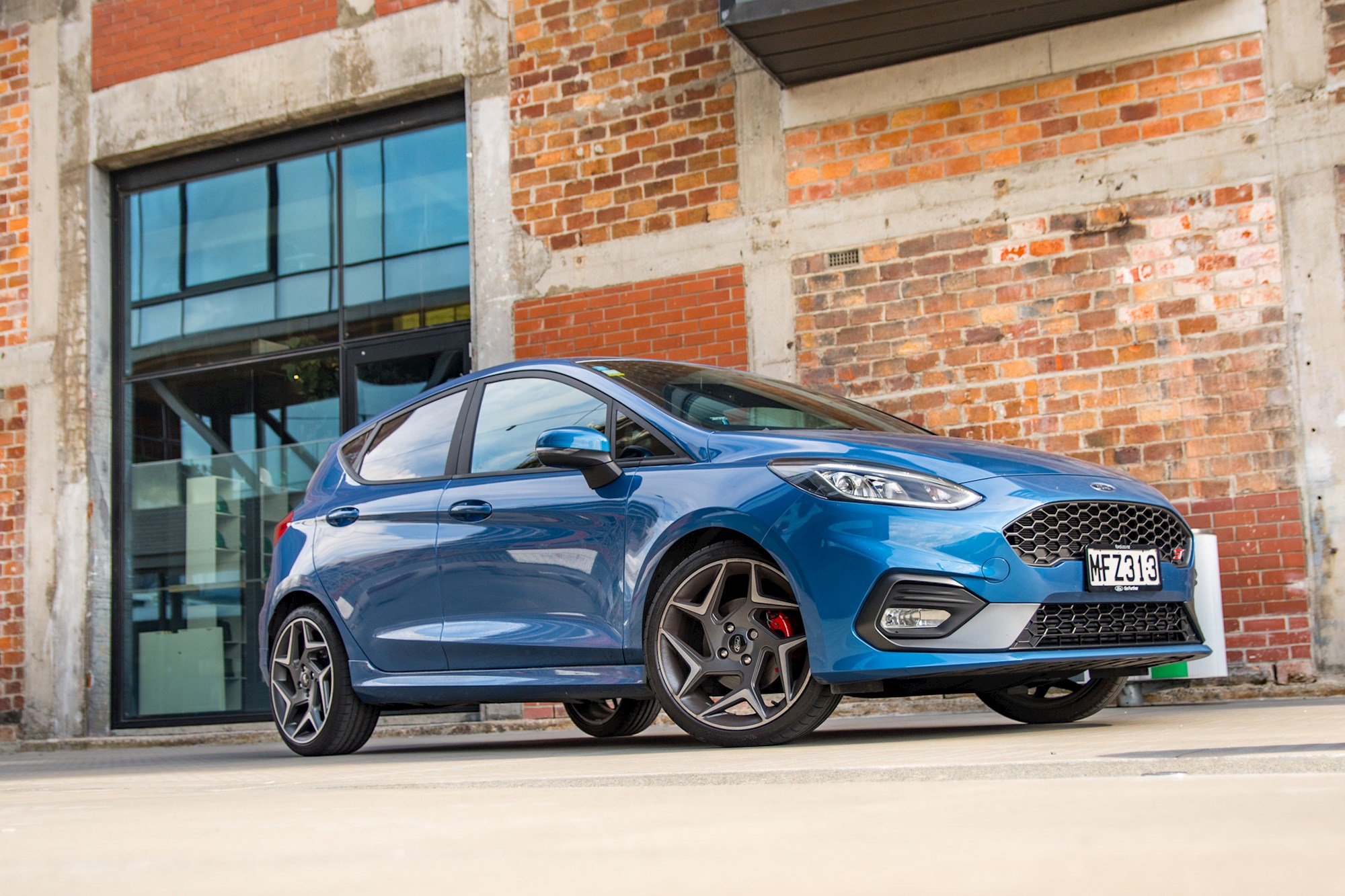 Set to arrive here proper early next year and priced at $35,490, the littlest ST sports wanton change over its much loved award-winning predecessor. New Zealand now gets the five-door variant instead of the three-door, it has an all-new cabin, and an attractive exterior shell that wears Ford's current corporate design language much more convincingly than its Focus siblings.

It's also, sadly, the only Fiesta New Zealand's getting. Such is the impact of SUV sales that one of the world's most iconic small cars barely gets a look in.

Gaining two more doors gives the Fiesta ST a new-found sense of practicality. Rear legroom and headroom is competent for the segment, and boot space has increased to 311 litres. The latest version of SYNC 3 makes an appearance in the 8.0-inch touchscreen, although we couldn't necessarily test it fully in this UK-spec press vehicle. Complete with a nicely redesigned dash that no longer looks like cluttered button and knob minefield, the cabin is much more welcoming than in the past models. Sadly a lack of plush materials and front Recaro buckets that are a touch too tight are a slight dampener.

The biggest changes, though, are unsurprisingly of the mechanical variety. While other markets get a raft of different Fiesta ST models Kiwis get the top spec, which means inheriting all the fancy technological fruit. 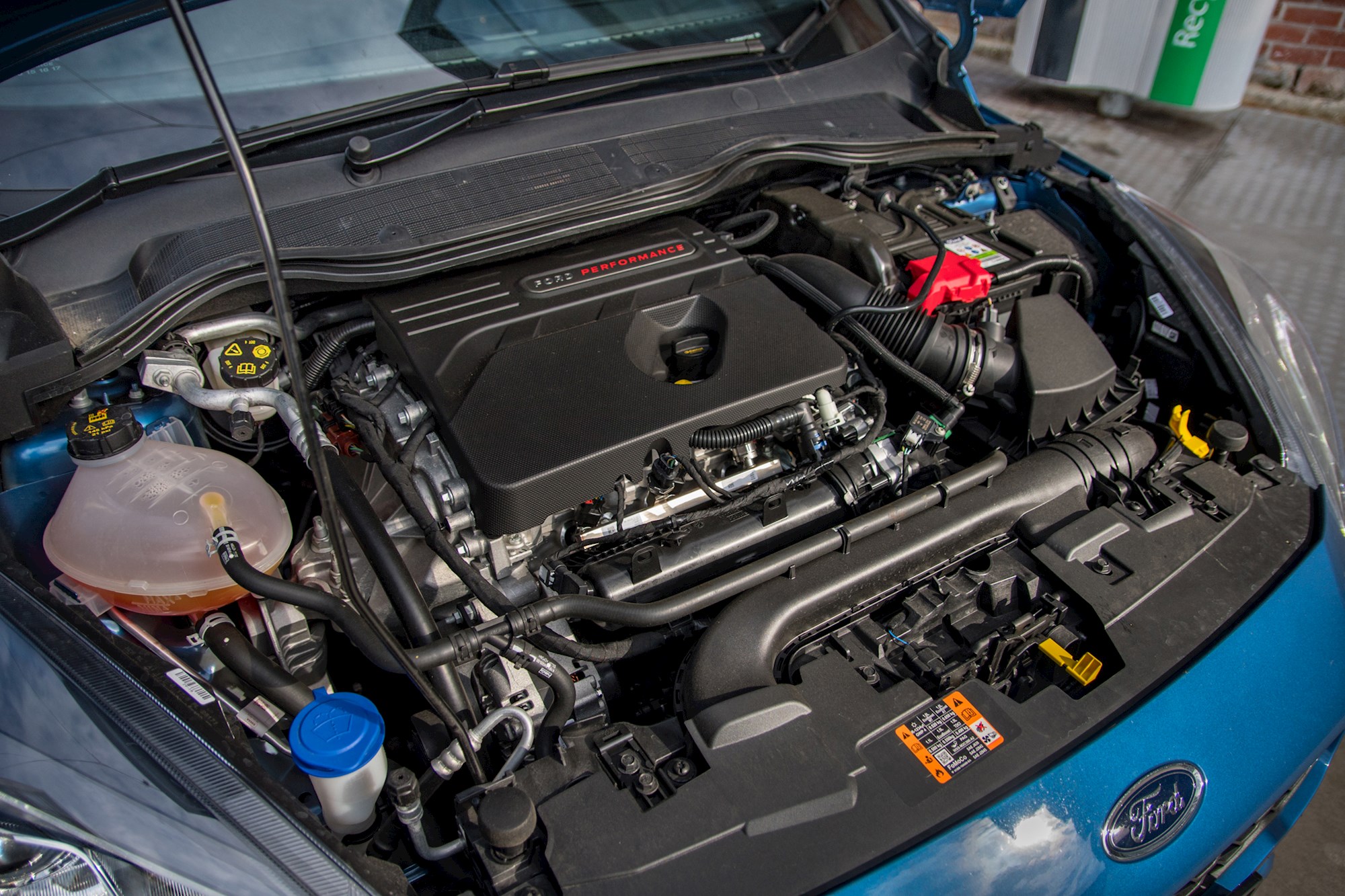 But undoubtedly it's in the engine bay where the most change has taken place. You could say Ford's taken something of a risk here; replacing the punchy 1.6-litre four-banger turbo of the outgoing model with a smaller, warbling 1.5-litre turbocharged EcoBoost three-cylinder. Underlining the level of risk here is the fact that power output is — technically — down on the previous model, too; from 149kW/290Nm to 147kW/290Nm.

Technically, because the last Fiesta only developed those figures during Overboost — a feature in the outgoing hatch that would increase the level of boost fed into the turbocharger from 18psi to 21psi for a maximum 20-second period in order to serve up a temporary jump in power. When Overboost isnt triggered the Fiesta makes 134kW/240Nm, but it will access that extra layer of performance during most bouts of physical, elbows-out driving. 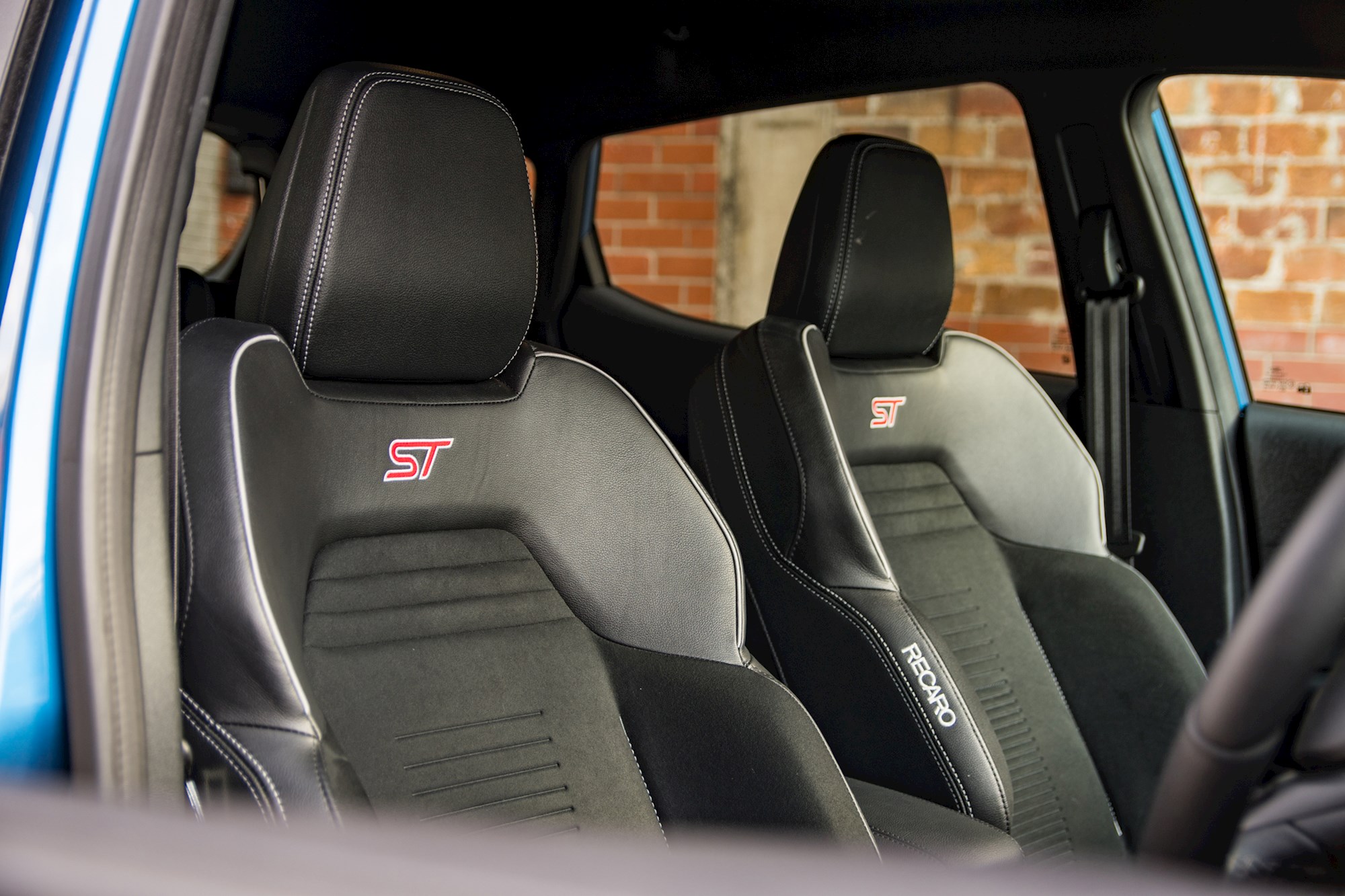 So, getting back to the new Fiesta ST; why the shrinkage in output?

This engine is Ford’s take on the ‘work smarter, not harder’ mantra. The new three-popper might make a bit less power outright, but peak figures come along much lower in the rev range. At just 1600rpm the driver experiences peak torque, helping give the new ST a savagery at low revs that the old one simply didn’t have. This low-down ability is in part down to an integrated exhaust manifold that takes less time to reach optimal operating temperature than in the last feisty Fiesta.

All of this means that, despite being down on power, the pint-sized Ford manages to complete the sprint to 100km/h in a claimed 6.5 seconds — seven tenths quicker than its Dad could. 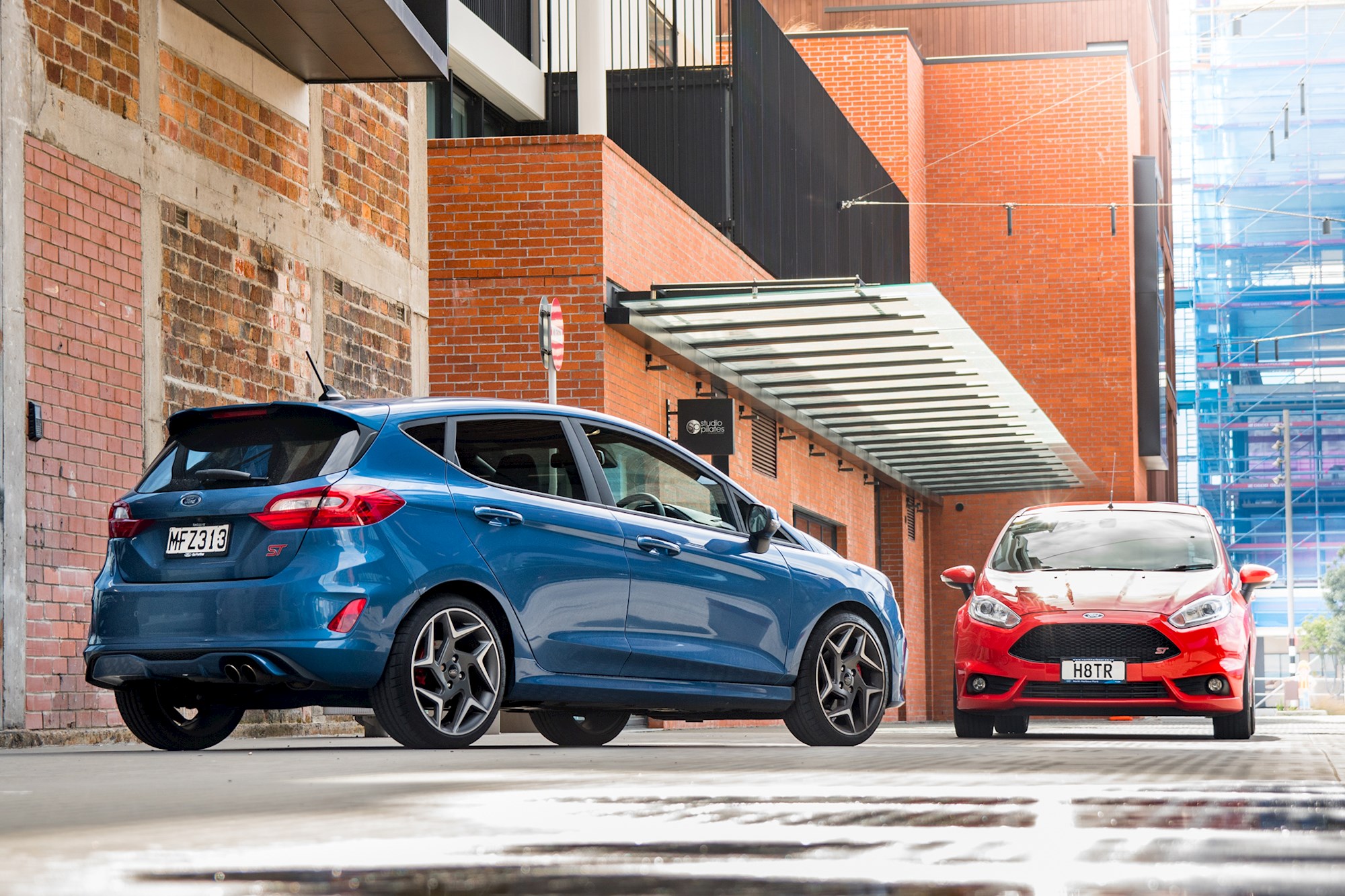 But as we all know, numbers only play a bit part in the story of cars like the Fiesta ST. Digits on a screen only tell you so much about the fun factor of a car like this. So, it seemed right for us to round up a last-gen Fiesta ST for a brief back-to-back skid.

They might be based off the same platform and feature similarly cheeky styling, but there’s actually quite a lot of difference in how they drive. The engines, for example, are an inversion of each other. The older four-cylinder 1.6 is much more rewarding towards the top end but takes noticeably longer to get there, compared to the boosted triple that excitedly marches to 6000rpm like a trooper, but delivers less raw thrill beyond.

The most surprising difference between the two is with their manual gearboxes. The new Fiesta’s stubby lever feels slightly longer in throw from gear to gear, and features a more notchy action. The clutch pedal is longer and lighter, too, with a slightly more free bite point. It’s lovely in isolation and the lighter controls make it easier to live with on a daily basis, but it’s subsequently harder to get into a rhythm with than its predecessor. 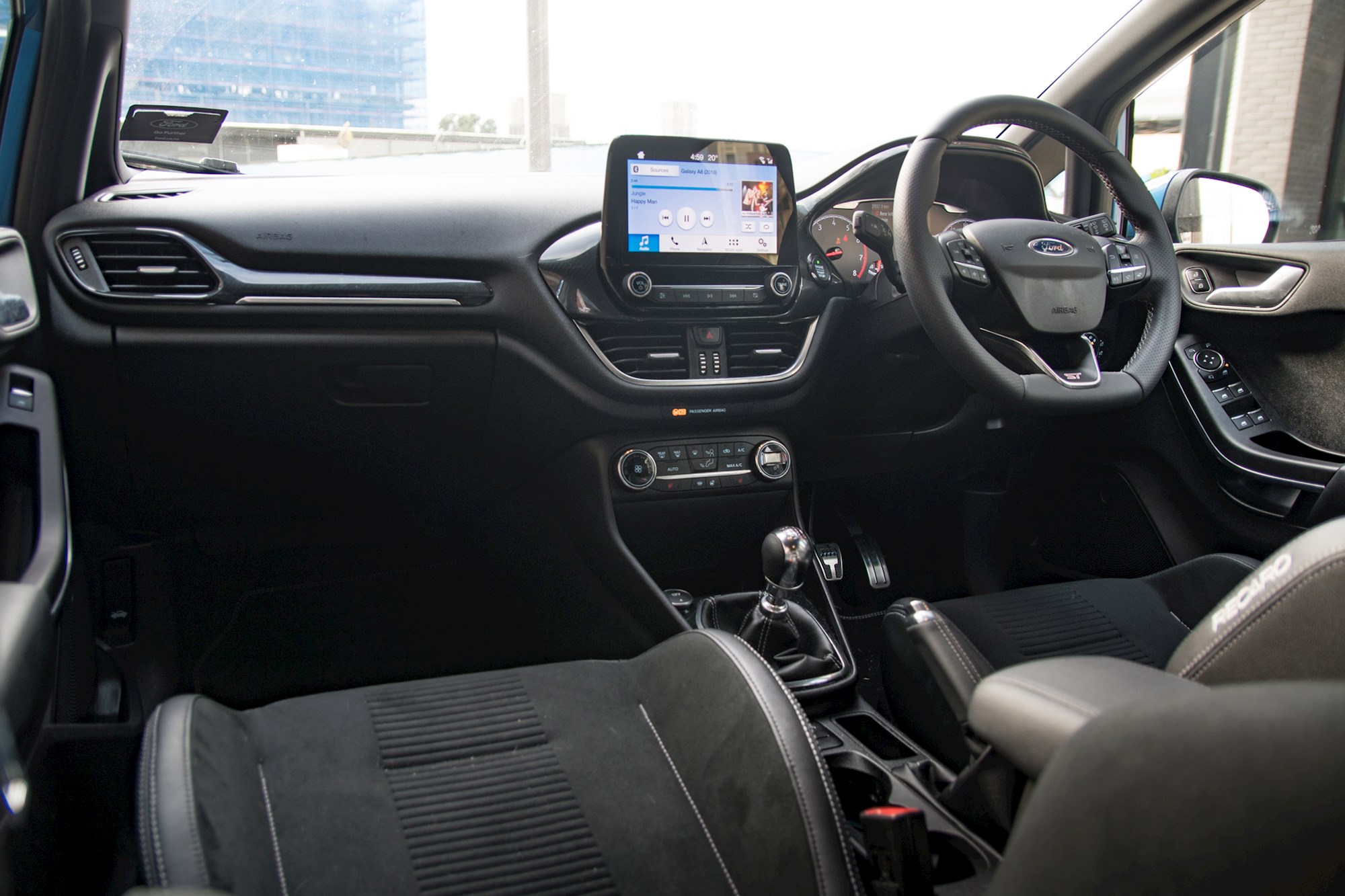 Similarities return when it comes to handling. The overarching feel is that Ford hasn’t necessarily transformed the Fiesta’s handling characteristics — it's just taken the things that made the last one so fabulous and magnified them. The new ST now has the fastest steering ratio of any Ford Performance creation, and that’s confirmed by the unsurprising enthusiasm it has for chasing apexes. Note that despite the increased capability, the 2020 Fiesta's damping is much more yielding in regards to daily usage.

Perhaps where the handling experience has improved most is in the new ST’s level of grip at the limit. You can feel the rear-end trickery at work, but you can also feel it cocking the occasional errand wheel up in the air. There's less scrambling for grip on the exits of corners,

It's new tech, sure ... but honed and tweaked to deliver old-school results. 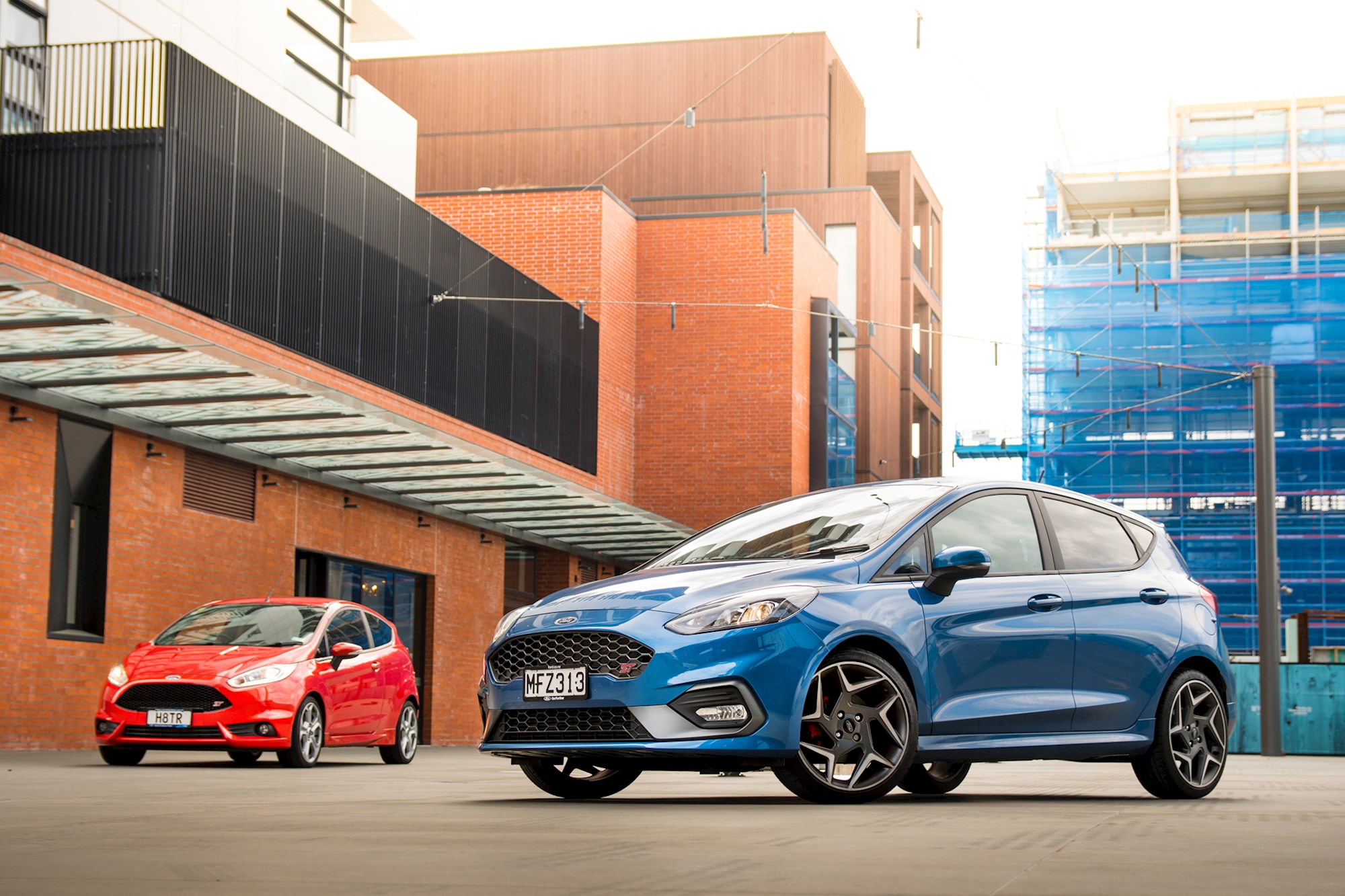 What impresses more than anything else here is the engine’s versatility. Ford has produced a unit that emits a familiar, uneven characterful howl towards redline. But, it’s an engine that also manages to defy the traditional limitations of a three-cylinder. It loudly burps into life on start-up, but once it’s warm it’s so smooth in daily commuting that you’d be hard pressed to tell that you were driving a triple.

There’s none of minor irk — little additional vibration or droning noise at idle. Yet, all it takes is a keen visit to 3500rpm to warmly invite those elements back in. Some of this will be down to Ford’s cylinder deactivation tech, which cuts the engine down to just two cylinders during low-stress scenarios in order to preserve fuel. The claimed 7L/100km is, indeed, impressive for a fizzy little hot hatch. 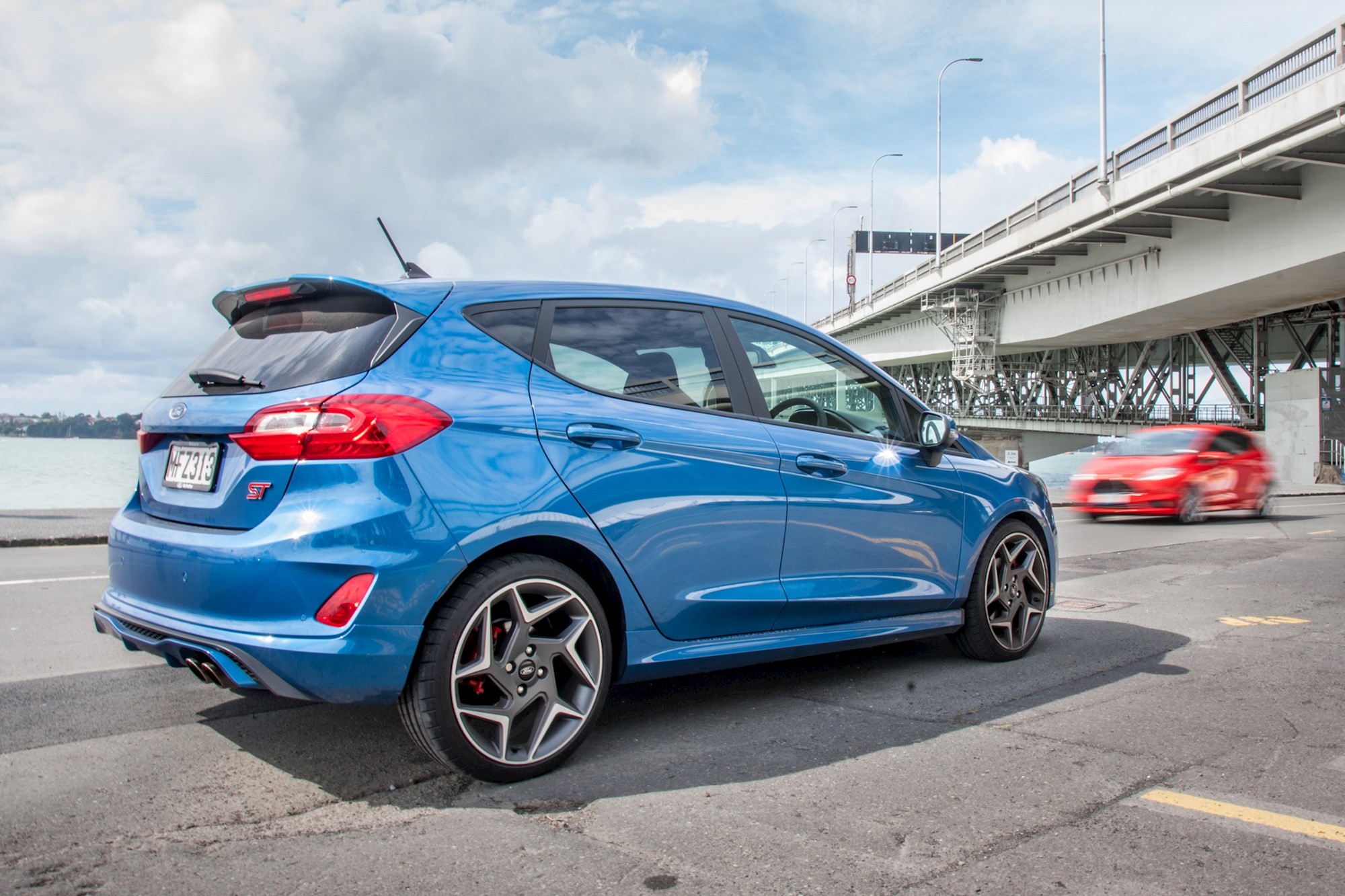 It might be a segment shrinking in the shadow of SUVs, but the cars that comprise the compact hot hatch class are as good as they’ve ever been.

The Suzuki Swift Sport is cheap, quick thrills, the Volkswagen Polo GTi is almost good enough to render the Golf equivalent a waste of time, and the new Fiesta ST is quite possibly the best of the bunch.

The last-generation model might feel like the sharper device, but the new one is more accessible, more usable, more capable, and — ultimately — a better car.