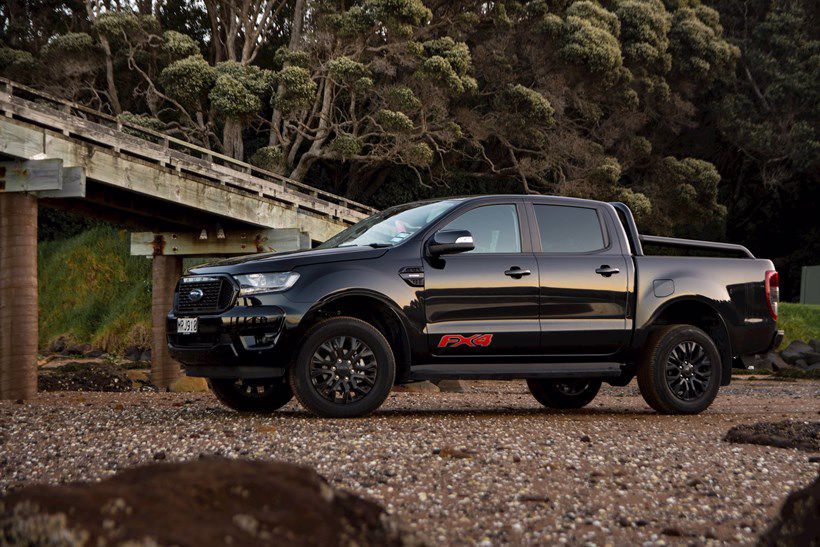 It’s weird to arrive at the conclusion that the best engine in the ute sphere is a little 2.0-litre. There’s something defeating about it, like you’re bowing down to progress and regulators and all the boogeymen out to kill off all the things about cars that enthusiasts once loved.

But, it’s true. Ford’s bi-turbo four is my favourite engine fitted to any double-cab ute on sale today.

My time with DRIVEN’s long-termer Ford Ranger FX4 4WD won’t be time I look back upon too fondly. Through no fault of its own it became the haunting, taunting ute parked in the driveway during the tail-end of New Zealand’s Covid-19 crisis — begging to be driven but largely left alone.

We did eventually get to pile some miles onto the sinister black FX4. It made multiple treks to the west coast’s beautiful beaches, the bustling metropolis of Hamilton, and up north to Whangarei.

The humble diesel four-cylinder hasn’t seen much in the way of revolution over the last decade, particularly in the utes that dominate our sales charts. Focus has always been most on no frills topics like power and torque, and how these manifest when put to the task of yanking along a Haines Hunter or a trailer load of inorganic collection trash to the tip.

Refinement has always been an afterthought at best, which is a shame given the amount of hours and the hundreds of thousands of kilometres that some ute drivers do annually. Imagine putting 400,000km on a diesel ute, without getting involuntary tinnitus from its truck-like engine? 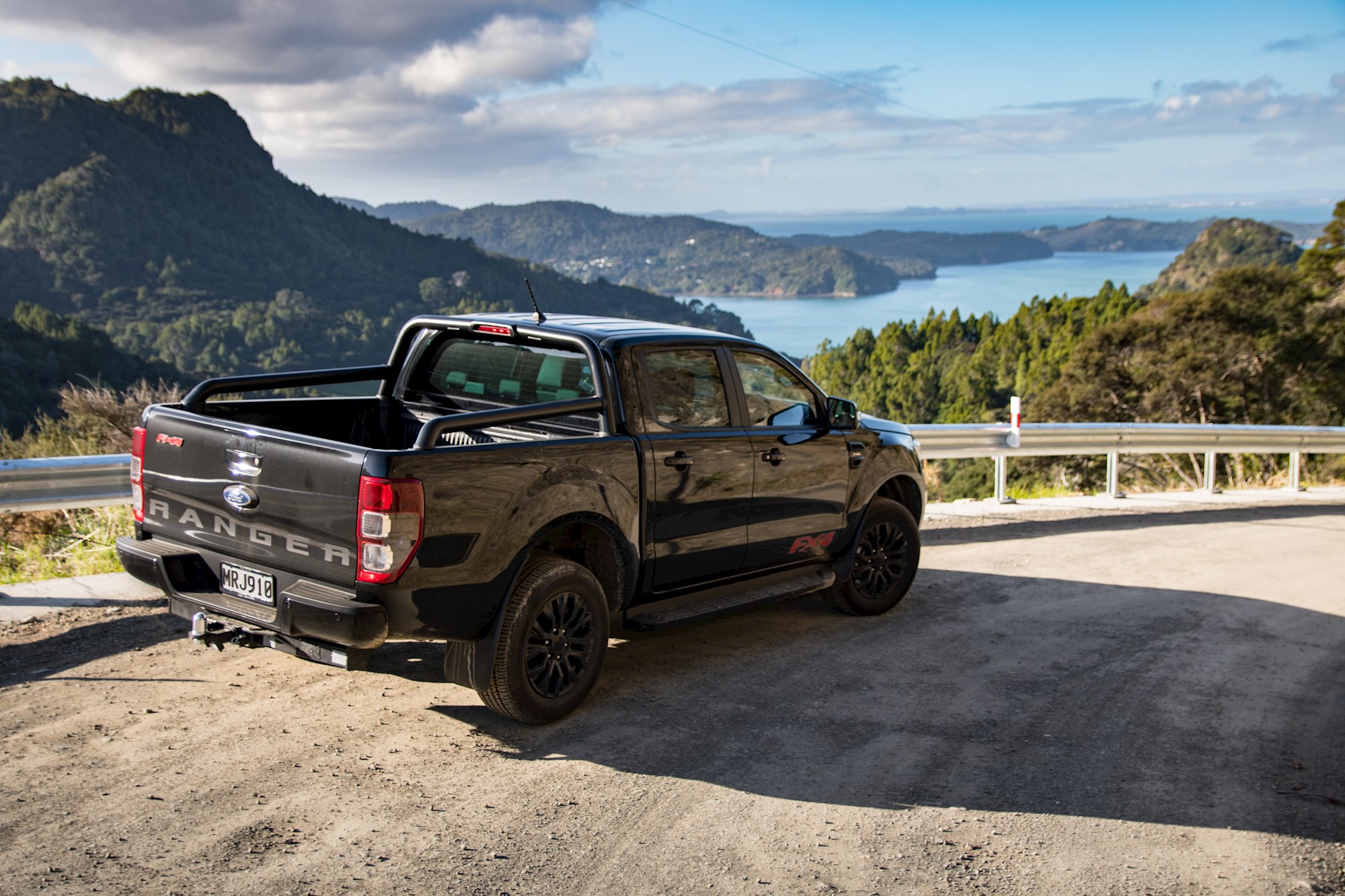 That’s an exaggeration, but it also goes some way to underlining what it was about the Ranger’s new 157kW/500Nm bi-turbo 2.0-litre that I enjoyed over my two months with it. Recently stepping back into a Ranger fitted with Ford’s traditional 3.2-litre did wonders in highlighting the gulf in refinement and noise — particularly in urban start-stop traffic and on the motorway.

I’ll even say that the smaller engine feels definitively quicker than the 3.2-litre. This shouldn’t come as a surprise given the 10kW/30Nm difference, but you’d be surprised how many still equate bigger capacity to bigger speed.

The performance gap is almost entirely down to the presence of a secondary turbo. While the five-cylinder requires a bit more of a run up as its revs rise, the presence of two turbos in the four-cylinder means one takes charge from a stand-still straight away — the other chiming in later on. 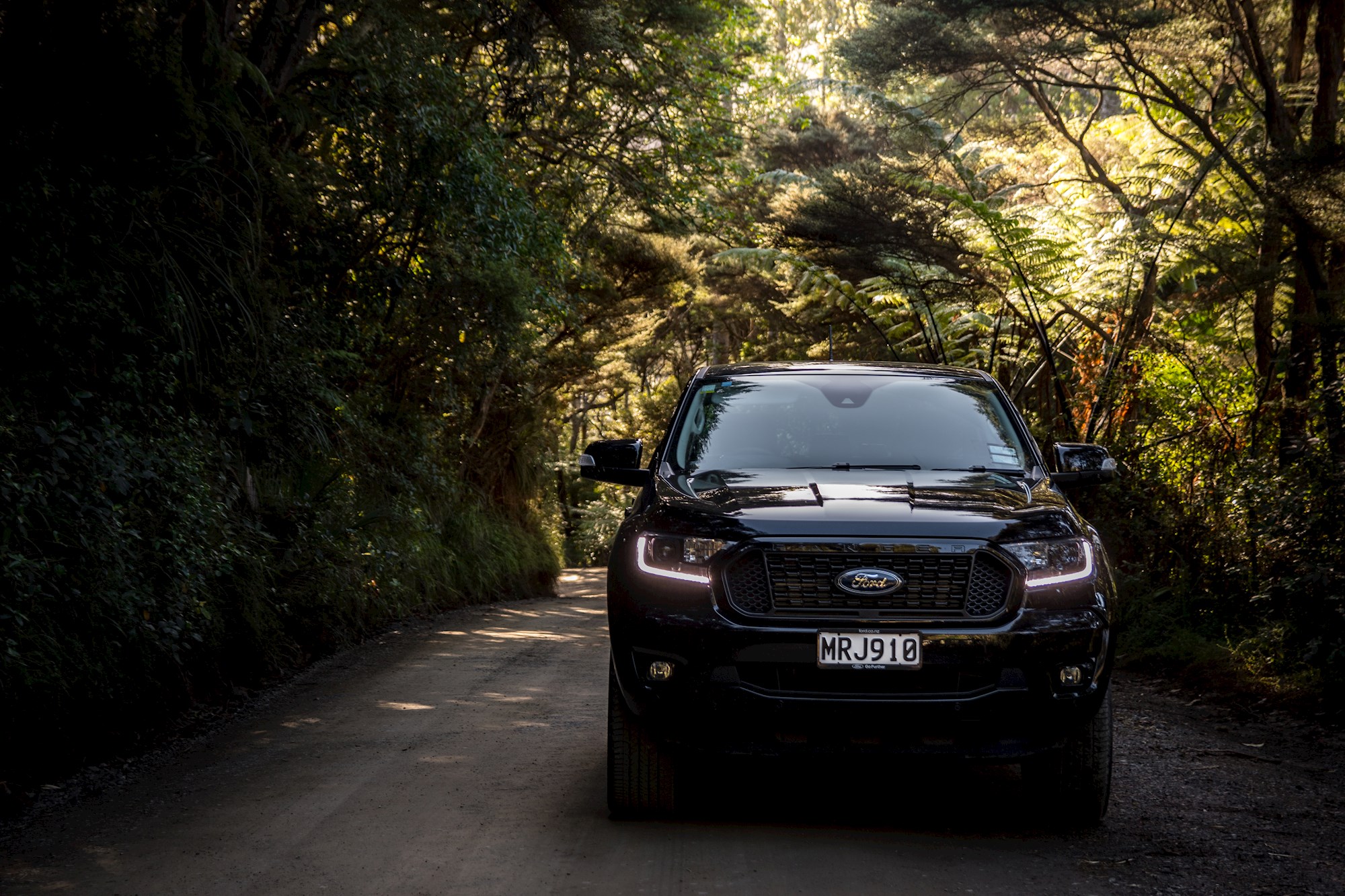 The other factor is the 10-speed auto. Its calibration amplifies the way the extra power and torque performs, particularly off the line. And, on the flipside, at 100km/h its gearing helps place the engine at a mere 1500rpm.

More available ratios spaced closer together mean quicker response when you require more power, although you get the feeling a good chunk of the way it’s been calibrated is designed to squeeze out better fuel consumption. In that vein, our best economy figures were in the low nine litres per 100km range, which isn’t bad but a ways off Ford’s claimed 7.4L/100km.

The awkward topic of reliability is the biturbo’s kryptonite. While the 3.2-litre is relatively proven, the 2.0-litre is not — even considering its slightly longer stint as an option in the Ford Transit. For what it’s worth, in its time with us it didn’t miss a beat. But, given the two-month period, you wouldn’t expect it to. 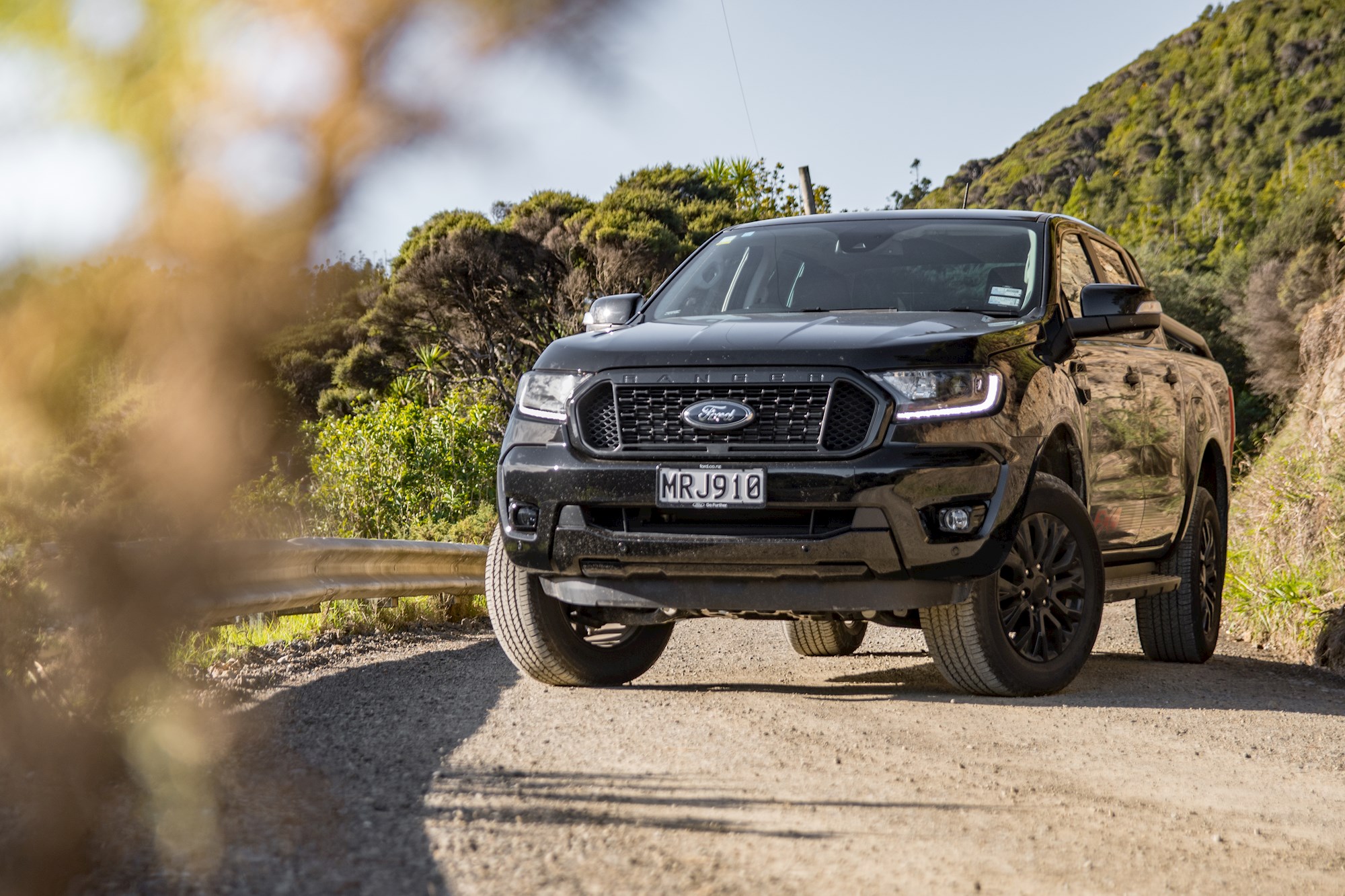 Mechanically, the closest engine to Ford’s biturbo is Nissan’s twin-turbo 2.3-litre, as seen in the Navara and Mercedes-Benz X-Class (remember the X-Class?). It’s much louder than Ford’s unit, with less power and less torque. The other ‘small’ engine is the single-turbo 2.4-litre in the Mitsubishi Triton — surprisingly capable but ultimately nothing special.

When thinking numbers, Holden’s torquey Duramax 2.8-litre and its 147kW/500Nm is one of the first that come to mind. But it feels like it’s more or less cut from the same cloth as the Ford 3.2, with the same off-the-line characteristics. Toyota’s 2.8-litre is more workmanlike, like the Triton engine, but a new one’s just around the corner.

Really, the only other contender for is the Ford biturbo’s binary opposition; Volkswagen’s 3.0-litre V6 available in topline versions of its Amarok ute. It’s a rocketship off the line, smooth, relatively silent in typical commuting, and capable of similar class-leading towing and payload. But, you’ve got to spend at least $75,000 to get one — making it almost 10 grand pricier than this $67,890 FX4, the cheapest 2.0-litre 4WD Ranger. 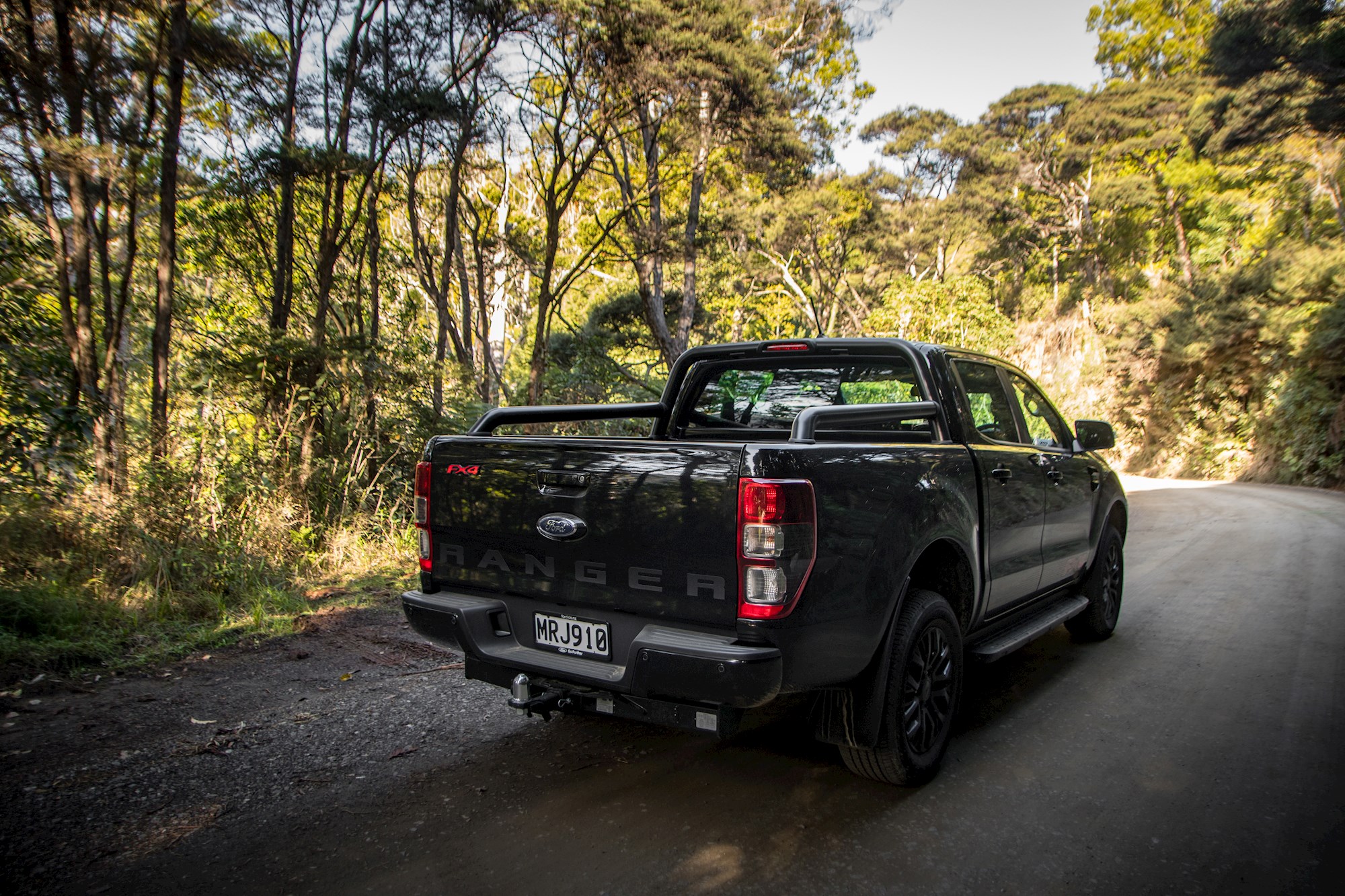 The Amarok engine is a fun extravagance, for those wanting a bucket of punch in their ute. The Ranger engine on the other hand feels like a window into the future of what all of these brands are going to be producing for their utes in coming years, as the world moves towards more fuel efficiency and emissions regulations.

Today’s social media comment section war bait, tomorrow’s double-cab ute normalcy. Engines like the 3.2-litre will eventually be phased out by progress, leaving small-capacity engines to rule the roost. Like it or not.